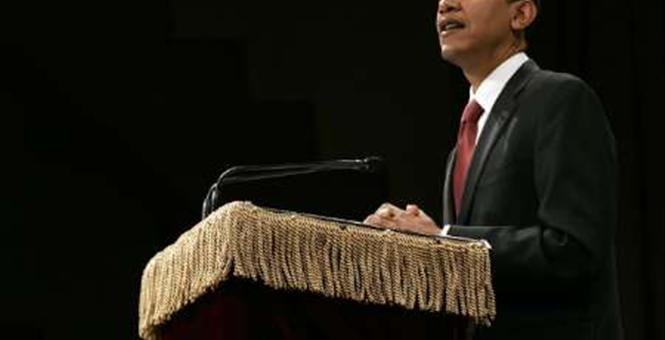 There was a big problem with Barack’s mea culpa speech in Philadelphia, defending his racist pastor, Jeremiah White. He failed to mention that over 300,000 white Americans gave their lives to end slavery. He didn’t mention that in 1854, abolitionists left the Democratic Party and founded the Republican Party specifically for the purpose of ending slavery and giving equal rights to all those who had been in bondage. And when he does mention the 3/5ths clause in the Constitution, he totally got it wrong, the way most Americans do. News flash . . . it was the abolitionists who insisted on it so that the slave holding states could not have their slaves counting as constituents so they could get more pro-slavery representation in congress. This is one of the most powerful battles fought by whites, to end slavery, which has been mischaracterized as being racist.

He needs to read the history of this battle for equality and realize that the party he embraces today was the party that voted against the 13th, 14th and 15th Amendments, while the Republicans supported them unanimously. He needs to acknowledge that the two dozen civil rights bills that were passed by the Republicans were overturned by the Democrats when they regained control of the House, Senate and White House at the end of the 19th Century.

It was at this time that the Democratic Party instituted Jim Crow laws. It was not whites that did this against blacks, it was bigoted, racist Democrats who would choose to divide a nation rather than give freedom to those they considered inferior. Had blacks been voting equally in both political parties, there never would have been literacy tests, poll taxes or other restrictions to voting. But because all blacks at this time identified with the party of Lincoln and were actually the ones starting Republican parties in southern states, and running and getting elected as Republicans, the Democrats knew that to kill a Black person was killing a Republican.

If he watched the award-winning documentary, Emancipation Revelation Revolution (ERRVideo.com), he would learn that the first Black Democrat, Barbara Jordan, was elected in the south in 1972, 100 years after Black Republicans had been running and winning for years. And it took a federal law to force redistricting in Texas to get her elected. He would be reminded that almost all the southern governors fighting integration, standing in school house doors, firing water canons at innocent people were all Democrats. And if his parents really were a part of the civil rights movement, he would realize that without whites fighting side by side to overturn laws that had been put in place by his very own party, it may have been another generation before the civil rights movement could happen.

It was not white versus black; it was racists, bigoted Democrats against blacks and whites who disagreed with them. If he saw our movie he would be reminded of three young white men who worked with CORE who were murdered, just for doing the right thing. He would see the incredible sacrifices that white men, such as Senator Charles Sumner endured for the cause of liberty for oppressed slaves. He was attacked on the Senate floor by pro-slavery Democratic congressman, Preston Brooks, who stormed the Senate side of the Capitol and tried to beat Sumner to death with his cane because he dared to introduce yet another piece of anti-slavery legislation. Brooks received hundreds of canes from adoring fans, while Senator Sumner struggled for three years to survive. When he did, the first thing he did when he returned to the Senate was to re-introduce a bill that would abolish slavery. This man was a white Republican. Preston Brooks was a white Democrat. Race had nothing to do with their individual passion to destroy or preserve slavery. It was a passion born of moral values and an understanding of good and evil. That is the discussion today that pastors are supposed to be having and preaching and encouraging their flock to understand. Rev. Wright did not get the memo and gets an “F” in Black history.

For Obama and his pastor to preach the “audacity of despair and racism” is an affront to all the people who have given their lives through the years to see racism destroyed. But that death blow has always been deflected by the Democratic Party that has had a vested interest in class and race warfare to keep their power base motivated and returning to the polls. Barack says, “I have asserted a firm conviction that working together we can move beyond some of our old racial wounds,” yet he sits week after week listening to sermons that say just the opposite. But those days are gone as we rip off the tacky, thin veneer of elitism and bigotry that has propelled them to power.

It is ironic that in his speech he challenges the listener by saying, “We can’t accept politics that breeds division, and conflict, and cynicism,” when he belongs to the very party that has always done that, to the point where the new liberal plantation has erected philosophical barriers around all blacks, condemning those who dare to challenge the liberal status quo and escape this manipulation and intimidation. They are called Aunt Jamima, like Condi Rice, or house Negroes like Colin Powell, or forced to endure high tech lynchings like Clarence Thomas. They have Oreo Cookies thrown at them like Michael Steele and are accused of acting white if they identify themselves as Republicans or conservatives.

That is “the racist spectacle we are not allowed to talk about.” When Blacks have to whisper at polling booths that they are Republican, for fear of reprisal from their liberal neighbors, then Barack really doesn’t get the real conflict that is alive and well in this country, and why should he? He belongs to the party of the overseer of the philosophical plantation that intimidates and marginalizes Blacks that dare support conservative values or Republican ideas.

So, if Barack was honest about his desire to “heal the nation,” he needs to learn American Black history, and take his pastor aside and tell him about it and challenge him to be more Christ-like when he preaches. If he knew real American Black history, he would not belong to the party of segregationists and bigots and would not have allowed himself to be sucked into that dark undertow of racial politics that has already robbed our nation of too many amazing blessings.